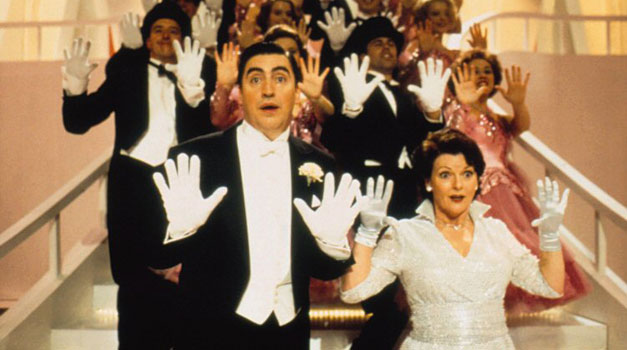 In a mood for something light yet quirky? A bit of dark humour, some dancing and a plot ripe with eccentric yet amiable charcters? Well then Plots with a view is just the film for you. Alfred Molina plays the shy and hopelessy romantic undertaker with a more than appropriate name Boris Plots. The story had me sold on that fact alone ;-)
Boris has two great loves: ballroom dancing and Betty Rhys - Jones. A childhood sweetheart who married the most boorish, rude and vulgar man. Since Boris and Betty were meant to be together they hatch a plan of faking Betty's death and run away to start a new life. They encounter a snag in their plan in the form of  Boris' competitor, a Mr. Featherbed (still laughing!), played by the ingenious Christopher Walken.
A film with more than a predictable ending, anything but an original plot, yet still refeshing and worth watching because the excecution is nothing if not original.

I have no idea why, but this movie has a second title and is also known as Undertaking Betty.
Posted by coffeeaddict at 16:11