Remember this post? Eppur si muove
I wrote this way back in September hoping against hope it would somehow make a difference. Alas it was as I feared: two days ago, on Sunday the vote of the (scarce) majority 55% voted against the new Family law that would enable among other things that gay people could adopt and have children.
As a lawyer, as a liberal as as someone who's only starting out in life, hoping to make a it a happy one in a culturaly enriched environment  it makes me sad beyond words to see that I'm living in a claustrophobic, homophobic society that shuns progress and hides behind a cloak of hypocrisy.

Feeling rather sad today....
Posted by coffeeaddict at 22:31 15 comments

About life, immortality and the continuation of the human race

I turned 30 last year. I graduated and I'm starting a new job that holds great potential. Having a baby seems like the next logical step. I've got nervous people lining up who can't wait to become grandparents, aunts and uncles...


Then come the questions or at the very least the quizzical looks. I usually shrug my shoulders and say: "Not yet." I'm not quite finished working on myself as well as making sure I've done everything I can to make damn certain I can give my child a happy, healthy, carefree childhood.
And then people tell me I'm selfish. Or they say I'm materialistic. Usually people with a lot more money than me, living comfortably in a two bedroom apartment their parents bought them.


The people who understand money is tight shake their heads and say we'll manage somehow.
Well let me tell you flat out we'll manage isn't good enough for me. Not even close.
My step dad says everyone has a right to be born, to exist. My future father-in-law (FFIL) insists that having children is the natural order of things, part of the circle of life.  I told them both that the mere reproduction isn't enough for me. That every being on this planet has a right that extends past mere survival, it's the right to prosper. What we all want, what we all strive for is to make sure our children have a better life than we did. To give them opportunities we never had.
Even my FFIL couldn't rebut my argument.
Posted by coffeeaddict at 08:00 21 comments

There is something so very quaint and sophisticated about gloves.  Wearing them properly is a skill that takes time to master and I confess I have been gaining mileage in this department for years.

A few years ago I bought my first pair of opera gloves: the forest green pair in the picture. Real silk of a fairly decent quality, they're a dream to wear. Since I don't go to the opera you might wonder what's the use of owning a pair? I like to wear mine for a promenade thorough the old part of Ljubljana with my cropped three quarter sleeve jacket.

In the upper right corner is a pair of vintage deer leather driving gloves I inherited from my grandma. The pink mohair knitted ones were made by my mum after I begged and begged her to knit them for me. She's such a skilled knitter but has all lost patience for it. I so wish she'd make me a few more pairs but I simply don't have the heart to pressure her when she'd much rather be outside gardening or taking a walk through the woods.

My every day pair is a simple black & cognac nappa leather pair I've had for a decade. Comfortable and familiar. The last is a pair of crochet mittens with mini pom poms I made on a whim. These come with a matching beanie and scarf I made several years ago. The photo is included in my blog banner.

Any thoughts on gloves? Do you have more than one pair?
Posted by coffeeaddict at 21:16 11 comments

On the blog, off the blog

It's been more than a year since I started blogging regularly. The 5 posts I wrote in 2010 don't really count as active blogging :-) And  it's  been only a few months since I started coming out to friends and   relatives about keeping a blog.
To anyone who asks I still refer to myself as a newbie. But after one year, a significant increase in   exposure and a blog format pretty much set I believe my grace period is over. That's okay. No drama.
As time went by I felt more and more comfortable letting people in. We've moved from me posting about my stuff and my DIY to sharing some vulnerable moments as well as some happy ones. And as honest and open as I try to write about myself there is still a large portion of my life that I keep off the blog. Some things are private, others, I feel are irrelevant and still some are difficult to translate into written word and equally if not more difficult to translate to English.

The most interesting phenomenon has been telling my friends about my blog. The people who  see what I include or choose not to include in  my posts. Though no one  ever asks I get a lot of quizzical looks when  something didn't make the cut. I'm quite sure it comes off as a sort of split personality  effect.
Re-reading my posts as I often do I sometimes get a strange out of body experience because I am reliving the same event  twice: As it actually happened and as I wrote about it. There is a  definite distinction and try as I may there will always be one.
That whole lost in translation thing comes to mind... 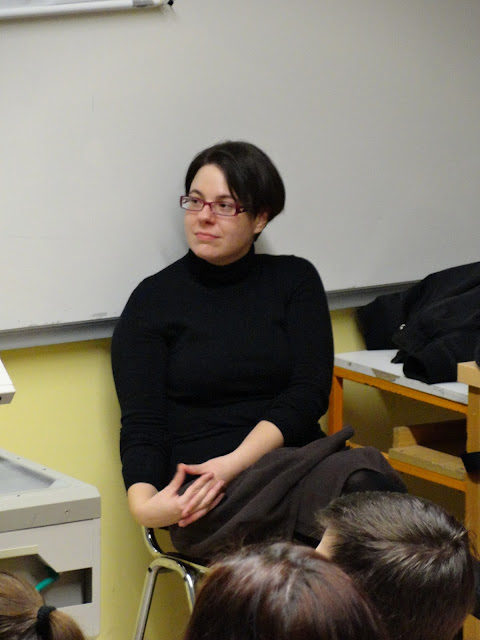 This  post is meant as one part my observations on the subject and one part explanation/apology why I've been absent from the blogosphere for the past couple of weeks. I miss it more than I can ever begin to explain, I miss visiting the regular blogs I follow and commenting, participating  in the debate. I feel so terribly disconnected and yes I just realized yesterday was the first Friday of the month and I haven't written a film review  post. Which makes it the second in a row.


I've also been involved in a couple of projects I  haven't really discussed on the blog yet: one of them being a a two months course to become a guide for visually impaired in the field of culture (galleries and museums). I've met so many wonderful new people, we discussed the problems the blind face on a daily basis, stuff we tend to overlook (pun intended!) or not really conceptualize.
I've also seen so many of Ljubljana's galleries and museums , I'm ashamed to admit I didn't even know some of them exist. All in all a timely reminder to reacquaint myself with culture. I've begun to realize this kind of involvement and real human interaction was missing from my life. But it can be pretty scary, looking back on the past 5 months and see the swift changes.
For one, I'm beginning to look my age and I don't know if it's a good thing or a bad one...
Posted by coffeeaddict at 10:32 15 comments