I've always been a great fan of yellow despite the fact that it does not suit my complexion. In fact wearing yellow makes me look like I'm dying of consumption which is sad really because yellow is such a bright and cheerful colour. As with all colours I don't look good in I try to steer clear of yellow, but its energy and radiance fascinates me.


I've recently taken some time off and went back to doing the things that make me happy: sewing and making jewellery. I decided this was really the time to push my boundaries and overcome the scare factor some colours evoke. So I decided to pull out my yellow beads and make something pretty with them.
Once I let go of the fear, the creative process was so spontaneous and fun and I came up with these two pairs of earrings:

I've also been experimenting with other colours that used to scare me with surprizingly amazing results: next up the colour grey and a new dress!
Posted by coffeeaddict at 21:41 15 comments

Marilyn was on to something

Over the past year I've started to notice a steep decline in the quality of clothing from the brands I used to rely upon. At first it was just the little things, like the occasional button falling off or a loose thread. Lately it has reached unthinkable proportions: brand new knits piling after the first few washes, colours fading and items stretching out. I was annoyed to say the least but then the latest incident had me bouncing off the walls.


I got the coat in the picture for Christmas from Mr. C. The label is Desigual, a Spanish brand known for their youthful and fun colourful patchwork and applique designs. This coat is all about fun. Therefore I was willing to overlook the poor fiber composition, since I already have a solid classic coat and a rainproof winter parka.
I've had it for three weeks and in this time I've worn it maybe a dozen of times when I started noticing fraying at the cuffs and the hems of the coat. I was bewildered. Seriously?! A frayed hem after a handful of wears? And I'm not talking about a subtle loose thread here, this was serious and visible fraying. We took the coat back to the store and got a refund for it. This was my second shock. The sales assistant offered a full refund on the spot and told us in a matter of fact style that refunds were a common occurrence with Desigual clothes. Consumerism mentality at its worse.

After returning the coat, Mr. C took me to my favourite jewellery store to purchase plan B Christmas gift: a simple white gold and teeny diamond pendant. It's such a sweet design, not too flashy and perfect for everyday. They also have matching earrings and since this is part of a permanent collection, I can afford to wait and get the earrings whenever I'm able to afford them.


The best part: the pendant cost just 10 € more than the coat but I'm sure it will prove more durable. So I'm taking a cue from Ms. Marilyn Monroe here, diamonds are indeed a girl's best friend!
Posted by coffeeaddict at 16:14 17 comments 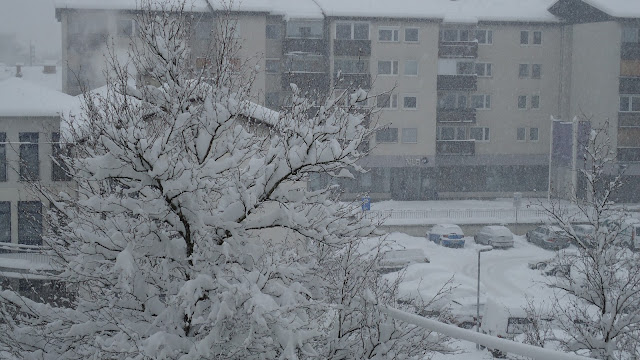 Lately I've been stuck in a bit of a rut. It seemed that the weight of 2012 came crashing down and though the world didn't end on December 21st it sure felt like it on occasion. It's nothing too serious but too many things happening at the same time, some good, some bad, some really bad which taint the rest, making everything appear drab and grey. 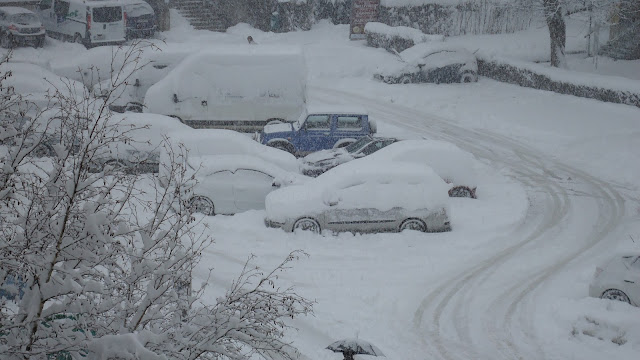 As much as wanted to spend the day in my pajamas and contemplate the drabness, I had to get up get dressed and head out into the snow storm.
Mr. C is away on business, so I'm left holding down the fort which means I get to do the things he usually takes care of. The car is very much Mr. C's territory since I enjoy the happy and carefree life of a pedestrian. 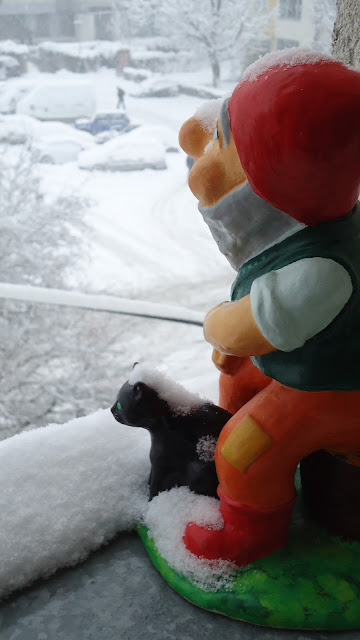 When I got down to the parking lot our car was covered in 50 cm of snow. Not good. I have shovelled snow before but never completely on my own, there was always more of us working in pairs. This time it was just me and a borrowed shovel.
I got the car clean and cleared a pathway which wasn't only great exercise but a valuable lesson in what people can achieve when we set our mind to it. Instead of lounging around in my pajamas feeling sorry for myself because it was Monday, the sky was grey, yadda yadda.... I took charge and did what needed to be done.
Posted by coffeeaddict at 22:26 9 comments

I love the English language because of it's frequent and encouraging use of the passive. Give it up for the Brits with their unparalleled manners to come up with such a diplomatic and exculpatory language. This way I don't have to write: " We, he, I, they... lost the wedding ring." I can simply write: My wedding ring got lost. 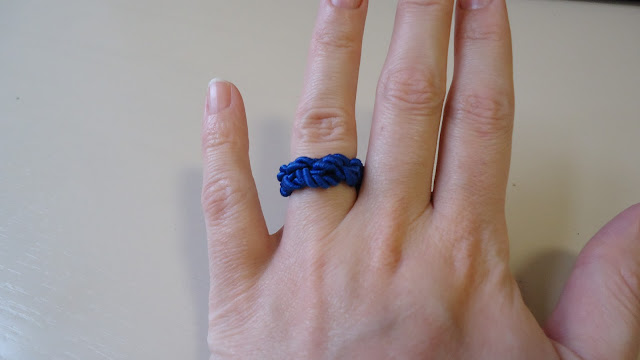 It was one of those absurd, nonsensical situations that have like a 1% chance of a disastrous outcome and by some twisted chance, call it a bizarre constellation cluster, bad joke or just faith, my ring got lost. We were at home, I was cleaning the apartment and Mr. C was putting a protective coat of rust proofing on the meteorite inlay of my ring. I guess somewhere in between all this the ring fell into the sink, got taken out with the trash, got eaten by a metal eating squirell (not that I ever saw any in the apartment). It's a mystery.

I'm not even angry or sad, most of all I'm just really frustrated because I'm such an organized person, I take such care of my things and then something like this happens. I guess if God really exists he must have one hell of a sense of humor. 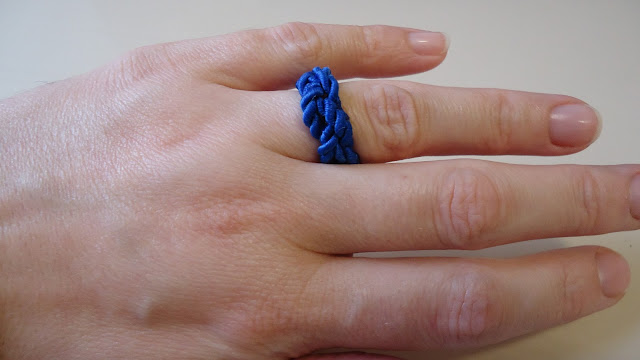 Without giving it too much thought a replacement ring was ordered (see, I'm using passive again) and paid for. In the mean time, I still wanted to have something to wear, if for no other reason than a good conversation piece. So I asked Mr. C to implement his DIY skills extraordinaire and whip up a substitute. So he did: it's a Turk's head knot ring in a sapphire blue twisted cord.
Posted by coffeeaddict at 22:57 14 comments