Way back in July when Mr. C and me were deciding how to spend our staycation fortnight, I expressed a wish to go to Minimundus, an entertainment park located just outside Klagenfurt near the Wörthersee lake.


Minimundus houses around 150 models of famous structures from around the World. Some modern, some from ancient times that no longer exist today.
Mr. C joked it was a very economical tour of the World and a fast one too! So off we went one sunny, slightly humid day in July.


The park is amazing to say the least. Immaculate and full of greenery and flower arrangements. On our three hour tour we saw at least half a dozen employees working on the models, cleaning the exhibits or pruning the flower beds.
Everyone was nice and accommodating. The atmosphere was very relaxed.


The carps in the shallow lake were very friendly and also a bit ronde. I think they get fed a lot by the tourists!


The staff goes to great length to reproduce the models with extreme accuracy, whenever possible the same material is used for the model as was used for the actual structure.


After we've seen everything in Minimundus, we went to...three guesses? No? Okay, we went to Ikea. There isn't one in Slovenia, so this is an opportunity not to miss. We bought some stuff for our apartment as well as some things requested by friends and relatives. And  we had lunch there too.


Making the most of our trip, we decided to pop into Klagenfurt as well. No maps or guide books, we winged it. Followed the road signs and managed (with only one U-turn) to land smack in the middle of the centre. 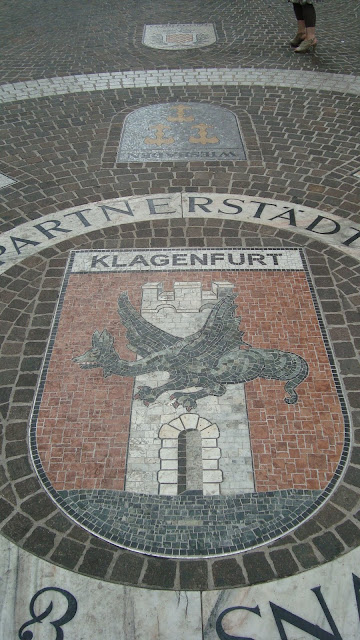 By now the weather had turned sour. All the humidity resulted in an afternoon storm, so we sought refuge in a cafe. Had some coffee and after a good 30 minutes the rain stopped so we were able to walk around for another hour.

I think we managed to see a lot in the three hours we spent in Klagenfurt that day, but next time I'll be bringing a map and a guide book with me. That way, I'll have a better overview of the centre and at least some background on the history and architecture.
Since Klagenfurt is only an hour and a half away from us, I expect we'll be venturing out there soon.
Posted by coffeeaddict at 12:08