After yesterday's debate on essentials and underwear, I was reminded of this gem of a film: 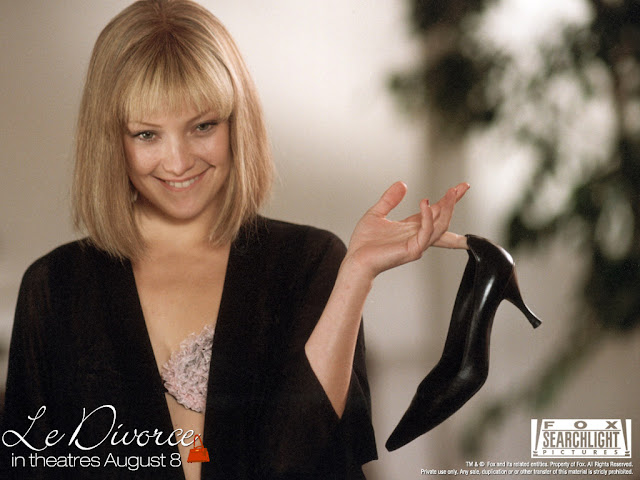 Le divorce received quite a lot of bad reviews and was generally badly received. In my opinion this is largely due to the fact that the film was improperly advertised as a romantic comedy. And people going in the theatres expecting to see something like: How to loose a guy in 10 days (starring Hudson again) or Monster-in-Law (Jennifer Lopez this time) were of course disappointed and confused.
I rented this movie for a girls-get-together film night, fully expecting something light with a predictable storyline, something not requiring my full attention. Turns out this is not the kind of film you want to watch when you just want something easy to pass the time.
This is not a romantic comedy, it's more like a social drama with cynical inserts and stereotypes of the French as well as the Americans.
As far as the story goes it's a bit unstructured and I really liked it because of it. In that aspect it has a feel of Robert Altman's Pret-a-porter. Where the focus isn't on the story itself but rather on the interactions of some genuinely quirky and eccentric characters.
As for the stereotypes, they're just that. I've read somewhere the French were offended. Which is silly, because the film portrays some all time favourite stereotypes about Americans as well. It's all just some innocent fun.
As far as favourite scenes go, the one in the clip is definitely it. Isabelle goes shopping for underwear to La Perla no less. If you can just ignore the obvious question of where did she come up with the money for it (this is still fiction after all!) it's truly a very funny scene.


Trailer provided by Video Detective
Posted by coffeeaddict at 14:41