I have absolutely no idea how to present this film without giving the wrong impression. It's such a complex drama dealing with the ugly side of human nature. Nicolas Cage plays Yuri Orlov, an illegal arms dealer. 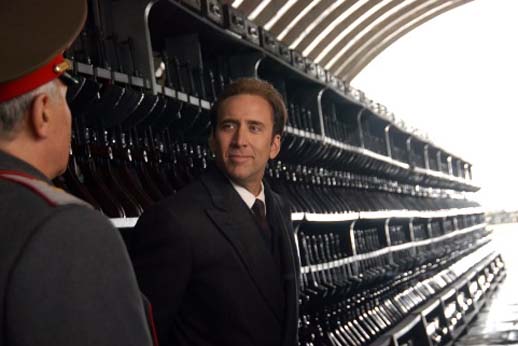 By nature Yuri isn't immoral or corrupted. He understands perfectly that either way his actions don't affect anyone because people will still engage in war and killings and other acts of violence or destruction. If he wasn't selling guns, it would have been somebody else.
The people around him are shocked and unable to cope with his seemingly immoral and cold attitude. Yet their position on the matter is that of denial and passive disgust. Which ultimately doesn't change the fact that people still go on killing each other every day.

Yuri is definitely not making the World a better place but for that matter neither are the people who condemn him.
After seeing this film I was left speechless. It's not a black and white sort of World it presents. There are no heroes and there's no wrong or right. I absolutely believe it's a story that needed to be told.
And though we can't all assume Yuri's position of "my actions don't change the outcome therefore I am blameless" we can't also just point our fingers at the others and wipe our conscience clean.

Posted by coffeeaddict at 16:21