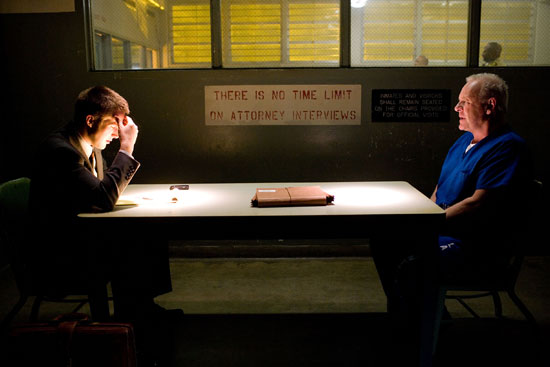 Continuing with my guilty pleasure "strictly for entertainment films" here's another fascinating genre: thriller / courtroom drama. I find American courtroom drama shows fascinating. Be it a film or TV series I devour them all. I'm willing to turn a semi blind eye to legal inconsistencies as long as they are sparse and at least plausible.
I'm also a huge fan of anything John Grisham ever wrote. Perfect summer seaside literature.

Fracture fits into the category of thriller / courtroom drama perfectly. The entire story is comfortably within the specified parameter. What gives it the edge over other similar films is the cast.
I've been doing my film reviews for a couple of months now and those of you who read them are well aware by now that the cast and the story feature prominently in what in my opinion separates a movie from good to blah.

As is so often the case in these suspense films of cat and mouse game, the two characters juxtaposed are an older man (usually the bad guy) and a cocky newcomer. The downside being the bad guy is usually played by a charismatic old school actor and no matter how sexy or cute the young actor is he's vastly out of his depth.
Off the top of my head, Seven is a typical example. I mean honesty Brad Pitt and Morgan Freeman, though both play detectives, Brad Pitt sort of fades out. Another one is Sleuth with Michael Caine and Jude Law.

In this case Ryan Gosling goes up against Anthony Hopkins, Mr. charismatic incarnate and more than holds his own. And what could easily turn into another boring justice prevails lecture turns into a genuinely exciting setting of suspense, mind games and tongue in cheek innuendos.

And one can hardly wait for the other actors to clear the screen and have the two characters go at it again for another round.

Posted by coffeeaddict at 14:00