The Anatomy of Beauty

What is Beauty? How do we define it? Is it hidden in the mathematical precision of an unknown algorithm? The golden ratio? To me true beauty is something almost tangible. I recognize it through a feeling I get when in its presence. It is an experience, an experience of Beauty.
Here is a random selection of poems, paintings, songs and other objects d'art that I find beautiful:

1. Celine Dion, 1 fille & 4 types
I eschew the term "best ever" but this album is very high on my ever so small a list of favourites.

De milliers de baisers or Millions of kisses is perhaps to my mind the most powerful ballad on the entire album. It speaks of a dissolution of a love affair and its aftermath.
So beautiful and eloquent, I am left speechless and in awe every time I listen to it. 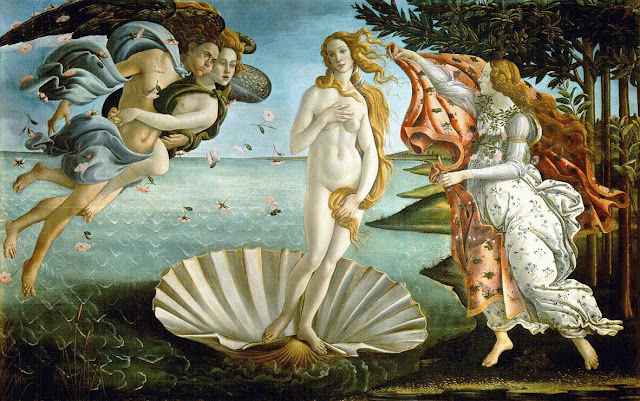 I don't profess to be particularly knowledgeable when it comes to fine arts but I am able to recognize quality. This piece has me mesmerised since I first saw it some ten, twelwe years ago. It is held in Uffizi Gallery in Florence.

A bloom deemed so perfect it even has its own day in Japanese culture. Hanami literally translates to flower viewing and is a day spent in admiration of cherry blossom and sometimes includes a ritual picnic under the cherry tree. 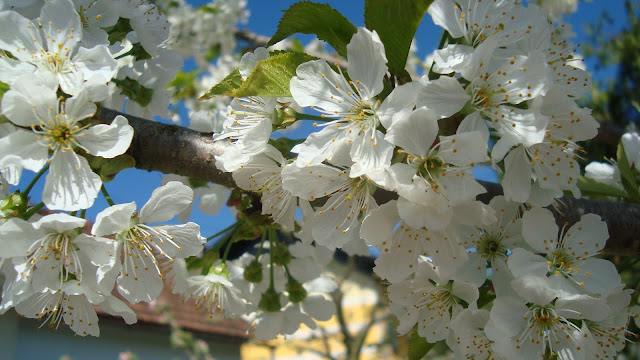 This photo was taken last weekend at my mum's house and the cherry tree is called Lapin which means rabbit in french. 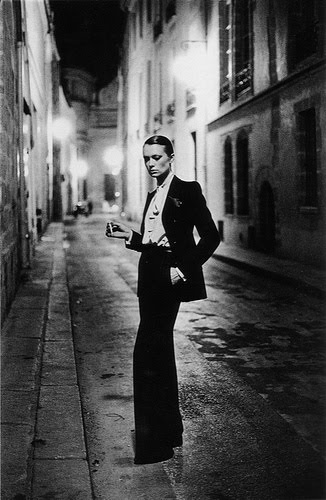 Le smoking was designed in 1966 by Yves Saint Laurent. A tuxedo suit for women was the first of its kind and it revolutionized womens' fashion as much as Chanel's little black dress did decades before.
The iconic photo was taken by Helmut Newton in 1975.

It is fitting that the title of this story is Silk for Baricco's words are like liquid silk. His style of writing has sometimes been referred to as literary prose.

Although his father had imagined for him a brilliant future in the army, Hervé Joncour ended up earning his living in an unusual profession that, with singular irony, had a feature so sweet as to betray a vaguely feminine intonation.

For a living, Hervé Joncour bought and sold silkworms.
It was 1861. Flaubert was writing Salammbô, electric light was still a hypothesis and Abraham Lincoln, on the other side of the ocean, was fighting a war whose end he would not see.
Hervé Joncour was thirty-two years old.
He bought and sold.
Silkworms.
Posted by coffeeaddict at 09:01