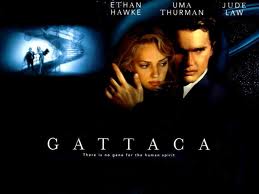 A film that tackles the age old issue of nature vs. nurture. Destiny vs. free will.
Based on a horrific premise of a world where human engineering has become the norm and individuals conceived naturally, called 'The Imperfects' are considered less worthy. Sounds familiar, anyone?

"I belong to a new underclass, no longer determined by social status or the colour of your skin. We now have discrimination down to a science."

Make no mistake, this is anything but an ordinary sci-fi movie but rather an intriguing drama that deals with deep moral issues of discrimination on the one hand and the infinite wonder of human perseverance on the other. Gattaca offers a unique view of an alternate reality, that is gray, sterile and above all based on perfection and efficiency.
I can't help but wonder if this is the world we'd be living in today if Herr Hitler would have won back in 1945?

As always I leave you with my scene from the movie where Vincent confronts his brother explaining the secret of his success. A beautiful, emotional scene. Warning: contains spoiler

"You want to know how I did it? This is how I did it, Anton: I never saved anything for the swim back."
Posted by coffeeaddict at 13:23