I arrived home yesterday to find a notice in the mailbox I've received a package from abroad. I rushed to the post office, 10 minutes before closing time. Luckily it's only around the corner to pick up my new vegan sandals from Mohop.
I've been coveting them since spring  when I blogged about them:
Today I covet

Mr. C who knows me all to well waited for me at home to take pictures of me as I hastened to unwrap the package and started putting them on, experimenting with various strings and techniques.


The whole idea with these shoes is to use a variety of strings, loop them in any way imaginable to end up with like a gazillion options. The shoes came with 9 pairs of strings and several wooden hoops as well as some basic tying technique instructions. Pretty neat.


We went for a walk late in the evening and  I just had to wear my new sandals. They're confortable and easy to walk in. I'm happy.

Why I don't wear black but maybe I should

Mourning is a very private affair for me. Much like showing affection in public that goes beyond holding hands or an occasional peck on the mouth. For this reason I chose not to wear black after the death of my stepdad. The other reason was my utmost loathing of all such customs. I find them tedious, outdated and irrelevant. Wearing black so that the neighbours won't have anything to gossip about is the high point of absurdity and conformism.


Since the funeral of my stepdad I have done my very best to dress in my usual (bright, quirky) clothing and trying to keep up the appearance of "bussines as usual". I was petrified of people coming up to me with condolences and accompanying chit chat, quizzical looks and expressions of sympathy.
On the other hand some mistook my behaviour for complete apathy and carelessness.
It was about a week ago that I came to realize his death had upset me far beyond what I'd imagined. A casual conversation with a co-worker sent me into a whirlwind of hysterical crying and all she did was mention what an ingenious gift her son had received for his birthday: a garden gnome.
Since then I've been doing a lot of thinking about the process of mourning, the passing of time and most of all acceptance.
The mere idea of acceptance has me going round in circles. For me acceptance is and has always been the end result of total understanding combined with wholhearted agreement. After my umpteenth attempt to reconcile with my own personal demons I've realized that acceptance is coming to terms with things I disapprove, disagree with but am unable to change.
Afterward I felt like listening to this (it's classic):

Posted by coffeeaddict at 22:15 9 comments

The beads are here!


It's time for another Bead Soup Party and I confess I'm a bit late to the party :-( This is my second Bead Soup and excited as I am to participate I sort of got caught up in a million other things, so now I'm rushing to keep up with the rest of the lovely beaders who've already blogged about their Soup partners, the beads they received, sent, etc.


My Soup partner this year is Agata from Poland who's already done here homework and published both the beads she sent me and the ones she received. You can see them on her blog: Cytherea Bijoux as well as her jewellery and photography, another hobby of Agata's. What can I say? A talented and lovely young lady :-)
The beads she sent me arrived in a super cute gift box. Each set of beads individually packaged in a separate mini zip lock back together with hand written labels.
And the surprises kept coming: Agata also sent me a pair of earring she'd made:

The reveal date for us is August 11th, which leaves me with a whole month to thing about what I'm going to make with the beads. No idea yet...


But the focal is just asking to be used in an opera length necklace or maybe as a single large bracelet charm? 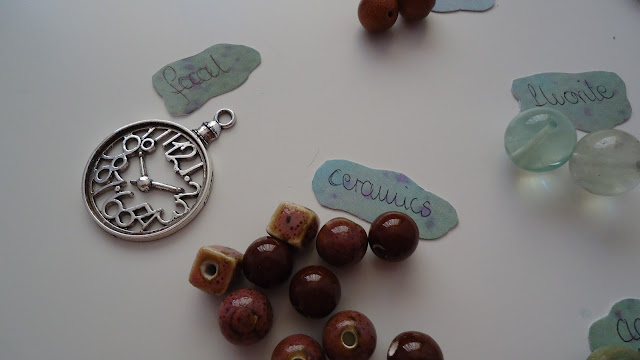 If you're interested, here are the links to last year's Bead Soup:


And the awesome lady who's making sure everything runs smoothly for the 6th consecutive Bead Soup Party Lori Anderson from Pretty Things.
Posted by coffeeaddict at 13:35 14 comments