The secret recipe for marital bliss

Bribery ;-P But seriously, Mr. C is such a sweet tooth, I can barely keep up. As part of our resolution to live healthier, we have stopped buying processed sweets and treats. Which means I'm always baking one thing or another.
I'm always looking for simple recipes and about a year ago I found this one on Jamie Oliver's web page: bloomin' brilliant brownies.

If I haven't already told you this, let me state it here: Jamie Oliver is my first cooking guru. I learned to cook from his books when I first moved out on my own and could barely boil an egg. His approach to cooking and philosophy of using the best ingredients to make simple but delicious meals is a winning combination.

One thing you need to know about his recipes though: Jamie uses way to much salt, oil and sugar. As a rule of thumb I always divide the required amount by two. This brownie recipe being no exception. So now you have one of two choices, you can either click the link and follow Jamie's recipe or you can read through this post and follow my revised recipe. There's always the option of devising your own recipe and ignoring this post completely.

Depending on how fast your oven is, preheat it to 180 C / 350 F. I've gotten so good at timing the whole procedure, I know exactly when to turn the oven on, so by the time I'm done mixing my batch the oven is ready almost simultaneously. (Trying to be ecological!)

Begin by beating the eggs thoroughly in a mixer. Slowly add all the dry ingredients: flour, baking powder, vanilla sugar, sugar (or honey) leaving the cocoa powder till last. Because it's so fine, the potential to make a huge mess is great. I usually reduce the mixer speed to the lowest and add the cocoa powder in small amounts. 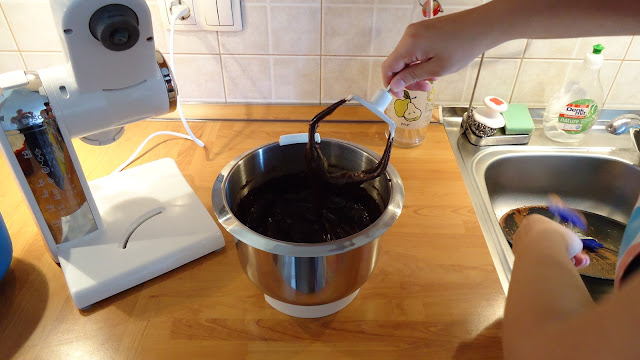 If you believe in microwaves, the next step is super simple: combine chocolate and coconut oil in a bowl and let the microwave melt the two together. The old-fashioned way to get the job done: use a pan or a skillet to melt them. In the beginning it wasn't uncommon for me to burn the chocolate. I've since learned that because coconut oil has a higher melting point, I pop it in the pan first, let it melt completely and then slowly add the chocolate. 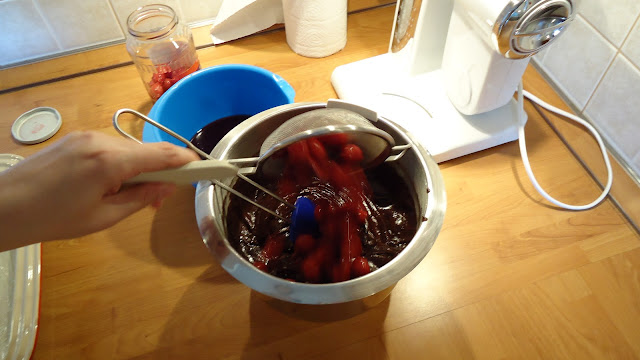 Let the mixture cool for a bit and then add it to the mixer. Scape it all in and then mix at the highest speed for about a minute. The whole batch should go from a wet lump to a smooth silky almost pudding like consistency. At that point drain your sour cherries and add them to the brownie mixture. Gently mix it in with a spatula. 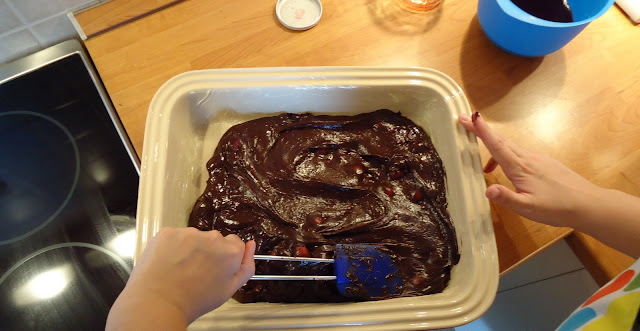 Transfer the whole gooey mass into a well greased pan. Mine is ceramic, a preference really, any pan is good. And pop it in the oven. 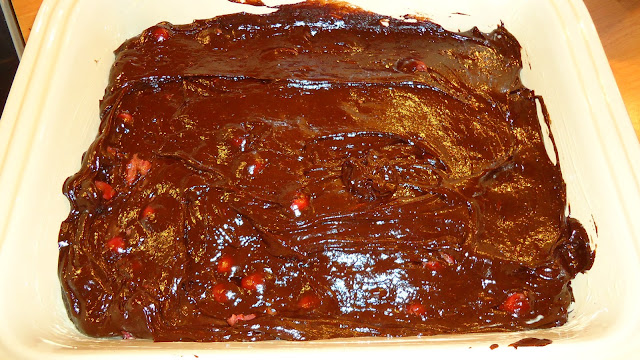 Here comes the trickiest part: determining if the brownies are done. Brownies unlike cake have to be moist on the inside, so I usually let them bake for 22 minutes before checking them. Jamie suggested giving the pan a light shake, the brownies should shake a little when they're done. Which is after a bout 25 to 28 minutes of baking. Again entirely depending on your preference. 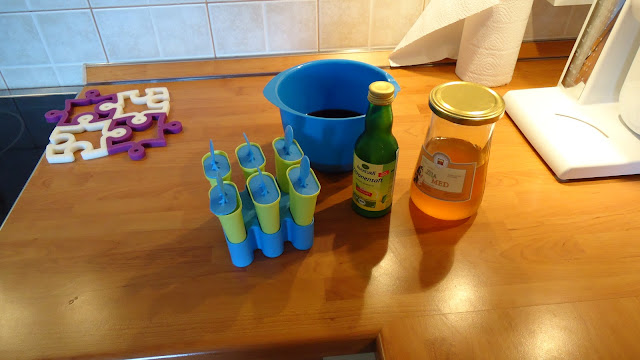 After baking the brownies it's time to be frugal and make some lollipops as well. I used to discard the sour cherries juice until it hit me that I could do something with it. Lollipops are ridiculously easy to make and way healthier than any store bought ice-cream.

All you need is the juice from sour cherries, a spoon of honey and a squirt of lemon juice. Mix it together, pour it into the lollipop molds and pop it in the freezer. Use more lemon if you want the lollipops to be more refreshing. 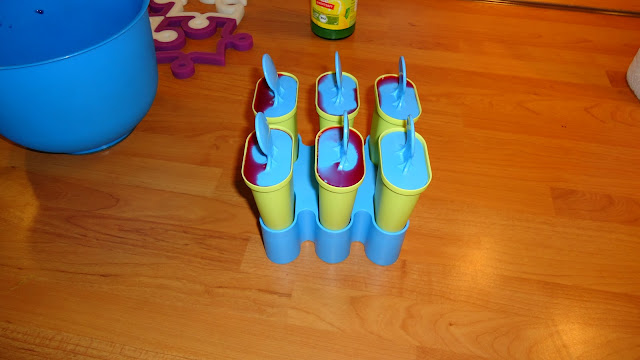 Posted by coffeeaddict at 15:06