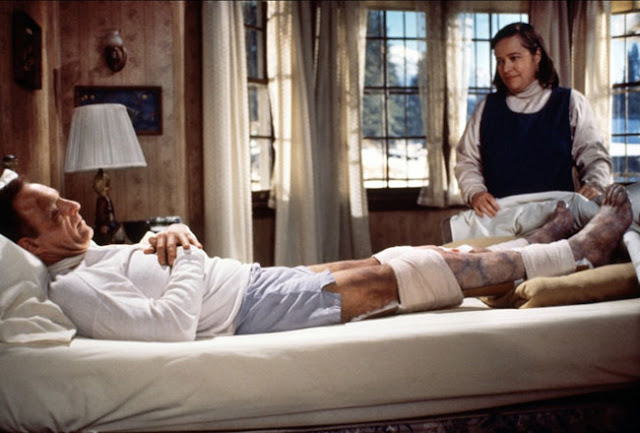 Yesterday I was watching a very old show by today's standards: 3rd Rock from the Sun. There was one episode featuring Kathy Bates as the cheery yet sinister looking housewife who turns out to be a psychopath. And I was instantly reminded of Misery.
It's been at least 7 years since I last saw it and yet even after all these years it's still one of the best thrillers ever made.
The set is almost stage like, with only two characters for the most part and one location. The story of a popular writer (played by James Caan) who is "rescued" from a car crash by a deranged fan could have easily flopped. But Kathy Bates' performance as Annie is mesmerizing. Chilling and horrifying.
The atmosphere these two actors have created is astounding. As a viewer one can so easily associate with Paul and the desperate situation he's facing. And Annie, with her conservative demeanor and God fearing attitude, then suddenly snapping into a maniacal rage...brilliant.
A number of films have been made since misery trying to cash in on the winning combination of secluded surroundings, deranged maniacal killers and victims helplessly trapped. All duds in my opinion. Even after 20 years Misery remains one of the best films in the thriller genre.

Posted by coffeeaddict at 16:14