I really dislike it when people try to convince me to read a certain book or watch a certain film. I can't help it, but I am instantly repelled by the said movie/book/play... So I won't tell you to watch this movie.
To call Love actually a romantic comedy is a gross understatement. Yes it's a movie about love; romantic, sweet, tragic, ridiculous, unrequited and all the subtle nuances in between. But it's mostly a great story (actually 10 stories all masterfully intertwined) about people. 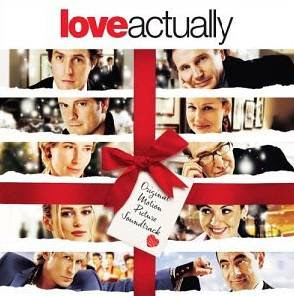 Another ensemble cast. Terrific actors, I mean a movie that has both Liam Neeson and Colin Firth can't be bad. But most of all spectacular music, that has been carefully selected by the director Richard Curtis to emphasise certain scenes. I read an interview that he did once where he explains how the script for this movie was written while he was listening to some of these songs and how he was inspired by the music.
So I leave you with the opening scene of Love actually. It's just over a minute long. Do take the time to watch it. And if you like it, I can promise you one thing: the movie only gets better...and better.

Warning: Have a box of tissues at hand when watching!

Posted by coffeeaddict at 11:59