Friday night film selection posts in a new format:  a monthly feature posted on the first Friday of the month. Even though I retired this post series, I realized I really miss doing film reviews. And this particular film proved too good to pass. It features Colin Firth after all and the man can do no wrong in my book ;-)


Easy virtue really isn't a grand film. It's a quiet little work based on the play of Noel Coward. The story has been told and re-told countless times. The stuffy English aristocracy with all the eccentricities that come with land and title (by default it would seem) and a young American bride that sets the wheels in motion. Literally this time. 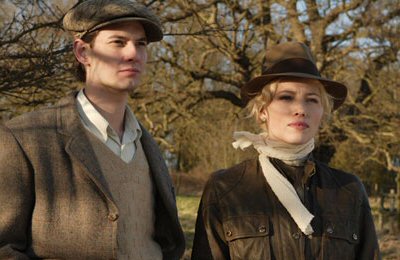 The story begins with a prelude of a female car racer meeting, falling in love and subsequently marrying a slightly younger man. After a brief sojourn on The Riviera they leave for England and his ancestral home in the country. A grand old manor desperately holding on to the glory of the old days.

And the residents? A sharp tongued butler with a drinking problem, an emotionally absent father, ignorant and superficial daughters. Holding this menagerie of characters together is the matriarch of the family, a tour the force brilliantly portrayed by non other than Kristin Scott Tomas. And though her character is very reminiscent of Lady McCordle from Gosford park, the latter has retained at least a spark of her former youthful ideals  while the former is completely disillusioned and emotionally dead.

The delicate balance is thrown for a loop and ultimately destroyed by the arrival of the newlyweds. While the son (all too quickly) settles back into the old routine, his new bride is adamant they should leave for London and start a new life.

Among all this emotional turbulence is the brilliant backdrop of the seemingly idyllic English countryside lifestyle with tea parties, village fairs and shooting parties. The more senior Mrs. Whittaker insists things have not changed the more determined younger Mrs. Whittaker  becomes in proving her mother-in-law wrong. The whole thing comes crashing down spectacularly at the annual Christmas ball.

In case you decide to watch it, I won't ruin it for you. You deserve the pleasure of seeing this for the first time without expectations or me giving away the best part. But so you know, this is excruciatingly difficult!

I will say this Jessica Biel is spectacular, she plays her role to perfection and after seeing this film I've seriously reconsidered her acting abilities. Ben Barnes is perfect as a type cast portrait of a young aristocrat who appears independent but it fast becomes obvious he has no resolve or courage to really stand for himself or for his wife obviously. Colin Firth doesn't get much screen time, but I enjoyed immensely seeing him in a role that actually demands a passive and out of the spot light approach.
Posted by coffeeaddict at 20:11