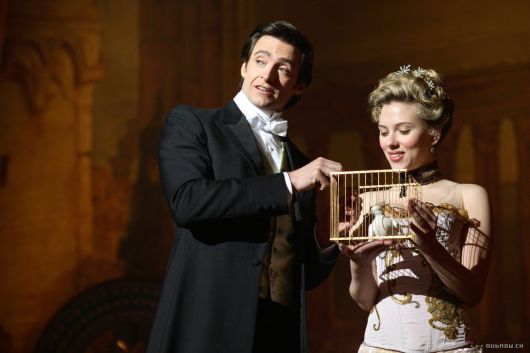 By now my readers probably got a general idea of the kind of movies that fascinate me. This one has all the qualities I look for in a good drama. A complex plot, rich, well developed characters, great cast and a story that can carry my attention to the end. Another Christopher Nolan film, it's a very dark drama set at the turn of the 19th century London. A dreary and foggy backdrop just perfect for this story.

Prestige is a film about a feud between two magicians who resort to unthinkable actions in an attempt to destroy one another. The driving force behind feud, as is so brilliantly portrayed in this film, is the need to assign blame and retaliate, get even. An event that might easily be a tragic accident ensues a violent and bloody retaliation that quickly turns into a tic for tac strategy between the two main characters. They become so obsessed with destroying one another, their methods of retaliation escalate to unthinkable measures.
In my research into feuding culture I was lucky to stumble upon a book by Nils Christie, A suitable amount of crime. Among other things the author, who has dedicated his life to the study of criminology, explains that he conducted a study into the psyche of the convicted collaborators of the Nazi regime. He said he found no monsters while visiting prison facilities, just nice young men with whom he conversed quite amicably. I wondered, how did these nice, amicable men commit such atrocities. I came to the realization their behaviour is much like the lines in the (proverbial) sand we all draw. We have a set of established morals and a pattern of behaviour and when we deviate from it, we set a line which we won't cross. In time our whole set of behaviour shifts towards the line and we move it once again, and again until we are so far away from our starting position that the set of morals we end up with has changed drastically. But because this transition is so gradual, the shift is imperceptible.

Posted by coffeeaddict at 18:08